Facebook
Twitter
Pinterest
WhatsApp
Café Madras GROWS on you.
When I mentioned this to my friend, a true-blue Chennaite, she agreed whole-heartedly. We had similar first experiences. After my first visit I came back with mixed feelings. It was over crowded – being a weekend morning – we had to wait 40 minutes for a table only to share it with strangers. The décor was, well nothing, it was just plain. The only things that were proudly displayed were the numerous awards. The service was prompt, but somehow I did not enjoy the experience so much. 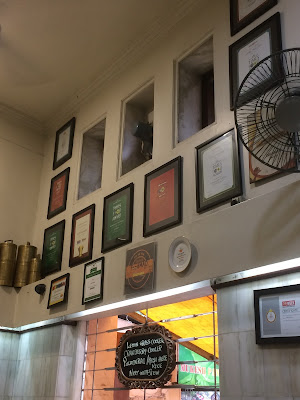 The second time, since I knew table sharing was the norm, I was more prepared and was able to take the wait and the table sharing in my stride. This time I enjoyed the vada rasam (totally hot, had my eyes and nose watering), dosa and coffee. This was also the first time I was introduced to filter coffee.  Most embarrassingly I didn’t know how to drink it. My friend showed me how to pour it between the steel glass and it’s container. She assured me it was ok to drink from either. The idea was to enjoy it. And boy did I enjoy it. AND apparently I have passed the same bug to my daughter for she loved it too the last time both of us visited the café.
During my subsequent visits I realised why Café Madras is the torch bearer of delicious South Indian cuisine in this city where there are probably thousand other south Indian joints. It is because they care about one thing and one thing only, FOOD. How else can a 77 year old restaurant not just survive but remain an icon otherwise. So now, when I go there all I am looking forward to is great food. 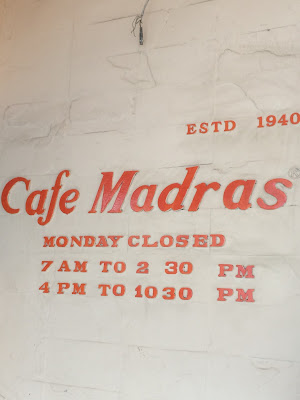 The last time I was here was with my daughter. My daughter loves idlis and dosas and filter coffee, so naturally she was floored by the tastes here and swore that she could have breakfast here every day. And we probably would if only we weren’t living so far away.  The vada-sambhar, idli-sambhar and dosa-sambhar are our favourites along with the most delicious aromatic filter coffee. God, if I as a north Indian feel so excited about the coffee I can only imagine how people who have grown up on it must feel. 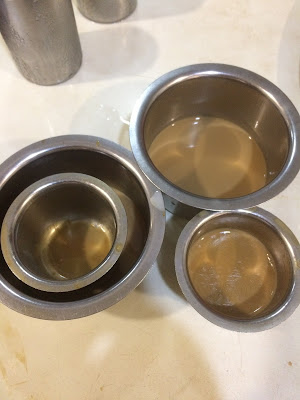