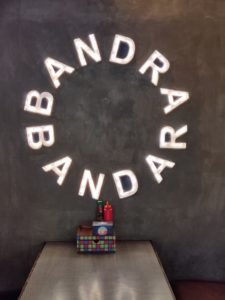 A beautifully crisp winter morning saw us bundled in the car and heading off to Bandra (W). With the sun streaming in through the windows we rode in anticipation of a sumptuous breakfast. The destination was the ever-popular Monkey Bar. Of-course it is known more for it’s happening evenings. But that did not deter us. What is a breakfast outing without a little bit of adventure, unless of-course the tummy protests?
They have indoor and outdoor seating. Plenty of space and what I call an XL size restaurant. Both areas have their charm, especially in winters. When we entered the place at 10 am, I was sure they would have a couple of tables already occupied if not more. But apparently, we were the first ones and remained so when we left around 11.15 am. That was the only odd bit. The place is done up in wood and browns and dull tones. It gives the place a very warm and welcoming feel. The bar is beautiful, with a wall to wall curved serving ledge. It is scuffed and scared from drinks and touch. The whole thing looks very rustic. And currently decked to the nines for the Santa-season. The first food item on the table was Curried Akuri with Malabari Paratha. The paratha was nice and flaky and the akuri was tasty, though not as spicy as advertised. But overall a good dish. Next were the Cinnamon and Toffee Pancakes. From the way they disappeared down the kiddie mouth was testament to their tastiness. After a half hour wait – this was long considering its English breakfast – came two loaded plates. They were a joy to behold and joy-er to eat. The pork sausage was simply yummy. The only thing below par on the plate was the hash browns. They were limp and uninspiring. Poor things got left behind on the plate, much to every ones’ dismay. The last but not the least on the table was Mutton Keema Pav. This was good. Over all, the above-mentioned dishes were good. Since we were the only ones, the service was good, just that the food took long to be prepared. So, go with leisure and pleasure in mind.